THIS IS WHAT I WANT TO BE – Short Story 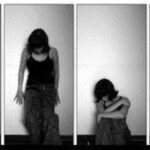