Lyfting in San Diego vs The Bay Area 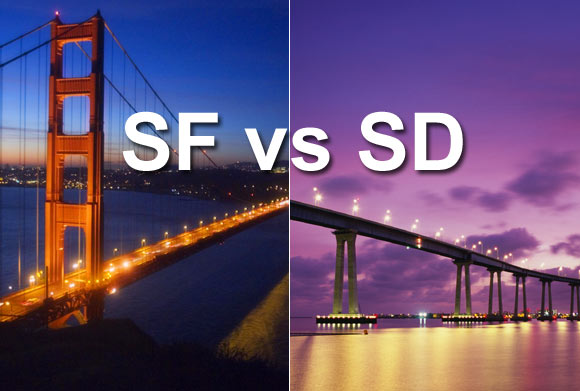 My passengers often ask me which country is my favorite of those I’ve visited so far. The answer is that it’s hard, if not impossible, to say since they all offer something different and are favorites in their own (though Rome is in the running). Kind of like the way we love each other and for me, my two cities.
As far as work goes, I have always preferred San Francisco. Something about the way people engage, are fast-paced, creative, dynamic and entrepreneurial. The wheels are turning in a way I just don’t find in San Diego. Not to mention the much better pay.
Lyfting has been no exception.
I have only driven in San Diego for a couple days, and mostly in Pacific Beach, so I need more experience to really be sure. So far, the pay in SD has not only been shockingly lower, but passengers tend to come in groups who are engrossed in each other, lighthearted conversation and see me as just a driver they’re not much interested in engaging with as opposed the the often single riders who are more than happy to connect in conversation of more depth. It’s even almost felt like a date from time to time.
I loved matchmaking and bartending for the ability to connect with people and really see them for their individual beauty. With this work, I am once again finding that thing I love more that most anything else in life.

Growing up in San Jose, a couple of the reasons I was so unhappy was from feeling a lack of friendliness and community; something I felt in abundance when moving to San Diego. San Diegians have always felt like family to me. It is eye opening to find a situation in which I feel a switch. Something that is giving me a more balanced perspective and I am grateful for. There is always exceptions and my experiences may very well shift, but this is where it is for now.

Onto awesome and entertaining passengers of the last week…
My first ride in Los Angeles when visiting my grandma and aunt was a young and very beautiful woman from Switzerland (no accent) who I picked up from the strip club where she works. She is an areal-acro-dancer who does her thing on the circle extended from the ceiling (what’s that called?) and then a lap dance. It’s how she met the man she is now in love with after charging him for a $100 dance. Go figure. After a long drive of talking while creeping to her dance class in LA traffic, we hugged and she was on her way.
Last night, there was a fabulous Starbucks manager who had pulled out on moving to Hawaii with his best friend in order to move to San Diego. She still went and he will soon be my neighbor. I hope we run into each other.
There was also a super fun couple a few years older than me who I was tempted to go to the dive bar with where they were headed and a very sexy man about 10 years older than me from Atlanta who was headed to his hotel before heading to Santana Row for some fun. Thank goodness he didn’t push me to join.
Working Thursday was fun. I drove people to the Levi stadium for the 49er game and picked a woman up from the Warriors game. Being a part of it all felt like just that. I was experiencing the fun of the events just as I did driving people around last night to Oktoberfest and other Friday plans.
In a couple hours, I will venture to San Francisco to give rides to those watching the Blue Angels do their thing at the end of Fleet Week and the people from the Salesforce convention who stayed to check out SF for the weekend. No doubt to be fun as well.

I have to force myself to stop working at night. I love it. After years of failure, struggling, having to rely on others and dealing with the pressures of life and people telling me I was doing things wrong to get here, it is all that much more amazing. I’m suddenly at a place where I love almost every aspect of my life. Maybe just for now, but I’m going to live in this moment and be thankful for every second of it.

As far as the highlight comments below from this week’s rides, I get a kick out of someone calling me “very affable”and hope that another describing me as “LIT”is a good thing. Pretty sure they didn’t mean on something, though with the energy level that comes from my excitement being around people, it wouldn’t exactly be hard to understand.