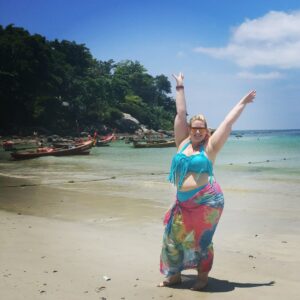 Let’s start with the biggest plus I’ve found in regard to being directly related to being bigger when traveling. I’m safer. Betcha never thought of that, huh?
Sure there’s going to be haters out there, and some may be so severe as to cause physical harm (I’ve heard stories), but I feel nowhere near as targeted as I did when my body was more of what is considered standard to be attractive. Luckily I have enough redeeming qualities in looks, style and personality (a big smile goes a long way) to be treated somewhat decently and still have enough people attracted to keep me satisfied. Most important to the freedom of traveling alone is that these traits, especially my body, provide a middle ground of being invisible enough (not physically, I’m 5’10”) to have more freedom to travel alone. 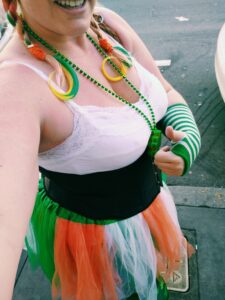 Having experienced the invisible line between fat vs not fat, I have found peace. In my bigger periods, I see someone who passionately indulges in life and partakes in as much as I can. Also that I’m likely living in a place that doesn’t easily provide the healthiest lifestyle and who has probably gone through something as of late.
Yes I deal with the constant challenge of binging, but I have also come to a place of self-forgiveness, love and patience in order to make peace, balance and empower myself. Like many San Diegians, I work on balancing naughty social time by eating as clean as I can when not (with exception to my weakness for cheese and wine). This is a part of the foundational wellness routine that I am always trying to get back to. Also my constantly changing fitness routines which currently includes hiking and yoga. 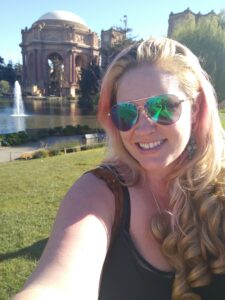 Over all, I’d imagine I have a healthier diet than most Americans and am confident that I’m above average for fitness. The reason I point that out is the bottom line that being big doesn’t mean I’m lazy or living a more unhealthy lifestyle than anyone else.
Subjected to a hate and prejudice that is still way too accepted, those of us who are living large likely have a story to our size that goes far beyond the general misconceptions that are looked on with disgust. Genetics, medication, illnesses, trauma and much more. For those who shame others for their weight, I wonder how they would feel if they knew that the person who they are focusing such ugliness at has gained most of the weight from a cancer medication. Or the trauma of loosing a child. Or even someone who has already worked incredibly hard to lose 100 lbs and only has 50 more to go.

If I hear someone laughing on the street, I still become paranoid it’s about me. The likelihood of that being true is depressingly higher than someone of a smaller nature. On planes, I constantly worry about the person next to me being unhappy with having to sit by me and miserable as we both try make due with seats only compatible for those of a medium build or smaller. Let’s not even go into the pain of my knees being shoved into the seat in front of me thanks to my height. Here’s to hoping that greed of airlines is addressed in regard to discrimination against anyone who is over 5’7″ and 150 lbs. 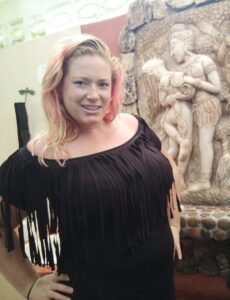 Back to my personal struggle with weight, anxiety has caused most of my life to be something of a nightmare. Finally finding a medication that worked (Celexa), I was so worried about the increased weight prejudice that would come into play if a potential side effect of weight gain took hold that I got off of it. Ironically, a process that caused me to gain 30 lbs. Add to that losing my dog who my life revolved around and I gained another 30 lbs. It’s hard to care about what you’re doing to your body when everything in your existence is black. 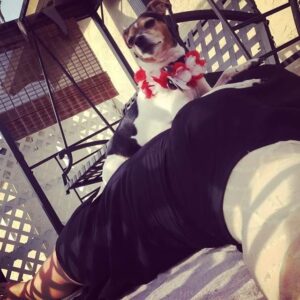 One of the most surprising things I hear, and on a somewhat normal basis, is how others can’t imagine me ever being insecure. No matter how many times I hear it, I’m dumbfounded. Yes I have more confidence than most people, but constantly being hit still knocks me down. Travel means I am putting myself directly in harms way for even more ridicule than normal. In the first month I was in Thailand, the woman who ran my place and adopted me as an honorary daughter for the time made multiple comments about how I needed to lose weight. A local man who was a raging and sometimes violent alcoholic constantly made comments about my weight despite what most seemed to believe was a crush on me. A Scottish woman also visiting told me that I am the only real free spirit that she’s ever met and that I’m an inspiration. Lovely but still hurt considering I’m pretty sure she felt that way in regard to the fact that I’m so confident and skinny dip a lot despite my size. It didn’t hurt that she was so impressed by that, I’m glad to be that influence on others, but because it’s so true. One of her friends, by the way, would barely even acknowledge me. What exactly is it that’s so threatening about a little extra curve and cuddle? 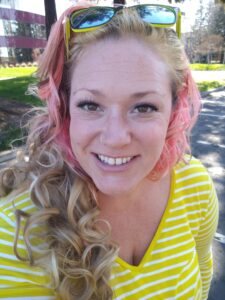 Traveling big can be hard in multiple ways. Being in another country means I don’t know how much I can safely stand up for myself. It also means I have very little control over when or what I eat. Kind of hard to follow diet patterns when not having much of a clue as to what I’m putting in my mouth. *insert immature chuckle here*
When I had lost a lot of weight, I felt much more targeted by men and more women were surprisingly nasty to me. I didn’t feel safe skinny dipping or with many of the other body freedoms I had before and I didn’t feel comfortable with my body as a beautiful piece of our humanity with sexuality just being a part of it. Instead, it seemed like it was the only thing most cared about. In relation, I also didn’t feel like I had as much of a voice any more, as most no longer appeared to be interested in seeing past my packaging.
It sucked.

I always want to encourage myself and others to focus on out health and wellness first. Yes, it is healthier to not have excessive fat, but there’s more to overall wellness. Part of which includes being forgiving, honest and compassionate about doing the best we can with what we’ve got. For now, I’m going to focus on the details of my body that I do enjoy. Especially those I will lose if I loose. Firm skin, less sagging, round and pleasantly clump, etc. I appreciate that the men who are attracted to me are more likely to be confident in who they are and are attracted to as opposed to what society tells them to want or who to be. Most of all, I am thankful for the role model I can be to others in regard to learning how to love, live and stick up for themselves. 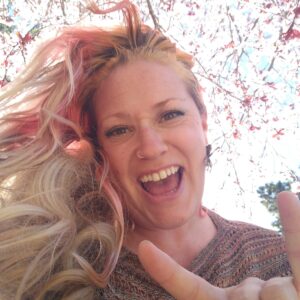 As far as travel goes, well, if I need a break from the weight-related hardships, I can always head to a country that prefer amazons. Tahiti, Samoa, Jamaica and Fiji to name an awesome few.

11 thoughts on “Being Big Abroad”