A year of living in a hippie commune and on a yacht, playing Gaelic Football, visiting Ireland & Scotland and working as Director of Sales & Marketing 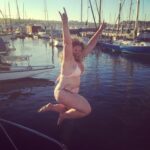 When offered a position as Director of Sales & Marketing, I was quick to jump ship in the Bay Area and run home to San Diego. While I prefer to do business in San Francisco, there’s a breaking point for how long I can handle being away from home. Funny coming from someone who’s about to move out of the country.

My family didn’t think I should take such a shaky and low-paying job (I’m a sucker for startups), but I knew I needed to get home. That impulsive decision had nothing to do with my ultimate goals, but somehow seemed to be the move that set my life toward them. It was maybe the first time I could hear my own voice above those telling me otherwise.

I had long-since wanted to start playing Gaelic football after a friend who had previously played introduced me. It took me about two seconds to join the team’s pub league and start dating another player.

Shortly after getting home, starting the job and Gaelic football, I moved into a large, beautiful and free-spirited hippie-commune style house that sat on a hill overlooking the ocean. The friends I had been staying with while looking for a place didn’t think it was a good idea. In fact, one even stopped talking to me in part because of it. Still, I trusted that the environment and that the roommates would bring a sense of calm, peace and love into my life in a way that was much deprived and much needed.

That was one of the best decisions I ever made for myself. I had my own space but still was part of a beautiful communal environment that fed my mind, body and soul. Whether it was morning sunrise Yoga, surf trips to Baja or communal dinners and happy hours, my lifestyle was as beautiful as the people around me. And as was becoming the norm, friends who had shown concern quickly became eager to join in at any given opportunity.

On a roll, I visited Ireland to see some of my family’s roots (a commonality I was constantly told by locals was the only reason people go there) and Scotland. An experience that has me planning on living in Glasgow and Edinburgh toward the end of my time living abroad.

Once back in the states, the job that had caused this adventurous chain reaction had done its duty and it ended. It was not the plan but not surprising, either. Soon after, a woman I had met through networking in the San Diego Chamber of Commerce pointed me to the opportunity to work with another woman who had previously been featured on Showtime and had a standing in the polyamory and tantra community. This was different than anything I had been subjected to, and therefore made me both excited and nervous. Through working with her, I was exposed once again to new ways of thinking, healing and being. I finally got to start learning about tantra, something I had long-time craved, saw a higher level of communication, experienced shibari and witnessed my first orgy. Most importantly, I found new avenues of love and healing.

The next part of that amazing year’s adventure came into play seven months after joining the commune house when my sublet ended and I moved onto what was soon to be my own (well, half my own) old wooden yacht. Once again, something the people in my life advised against but ended up joyously joining in on whenever they had the chance.

Not only did I get to have such an unbelieveable experience aboard that boat, but the harbor in which I was docked was an adventure of it’s own. The people who lived in this particular marina had grown up on boats. Stories consisted of whales swimming under their boats in Alaska, building movie sets in Mexico and other voyages I had only dreamed of at best. These people were true adventurers whose lives were mapped out by the gruff lines of the dark and leathery skin of their bodies, and yet there was still other sides of beauty that would never have been expected. For instance, the owner of the marina was part of a practicing orchestra that practiced every other Wednesday. The enormous boat garage would be transformed into a theatre of music in which I could listen from my boat or grab some wine, a blanket and go watch with friends from a few feet away. If that wasn’t enough, I could go to the hotel across the street where a professional venue and it’s concerts were visible from the pool.

I gave away the boat a few months later. It was too risky to keep and too much money to work on. I expected that. Most of the prodigious experiences of my life have been more temporary that the average person is used to. It all sounds like a fantasy lived when looking at it from the outside, but what’s not seen is how hard it is once you get in. The saying “the bigger they are, the harder they fall” doesn’t just go for people, it also goes for experiences. It’s the Yin and Yang of life and amusingly reminds me of the quote “adulthood is like looking both ways before crossing the street and then getting hit by an airplane”. Still, life will always be hard, so why not make it as glamorously dream-fulfilling as possible. If nothing else, at least I’m at least trying.

How about you? Tell us about a time others told you no but you followed your heart anyway.

3 thoughts on “A year of living in a hippie commune and on a yacht, playing Gaelic Football, visiting Ireland & Scotland and working as Director of Sales & Marketing”