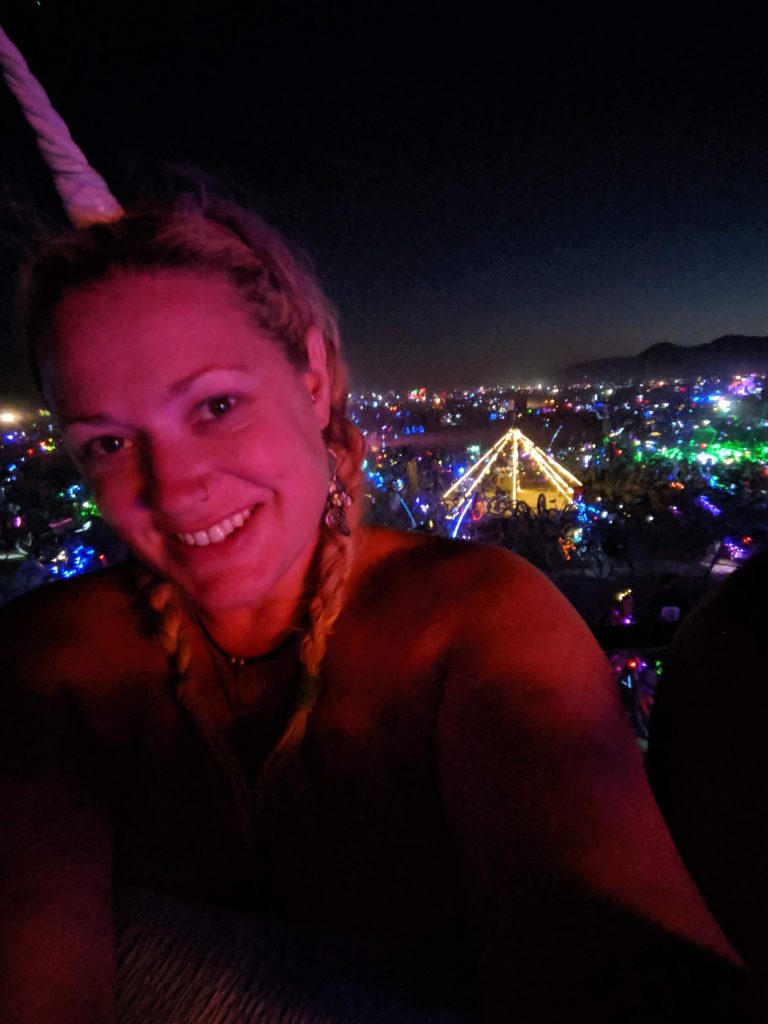 AUGUST 31
Making it battered and bruised…literally… it was time to once again to burn the man.
Determined to make it to one of Kelsey’s performances in the Black Rock Philharmonic at 11 AM that morning (early by playa time), I first prepped for the goal of making it to the Naked Tiki Bar that afternoon when dressing in a Parrot Head getup. Grabbing my bike when ready to head out to watch her performance, I thought about how bummed I was to have missed the one they put on at The Folly. An amazing cousin to an old-Western style art center (for lack of a better description) that was one of the pieces to be sacrificed to the fire gods for the year. I had never made it there but at least I got to see the orchestra in their home camp, which just so happened to be my favorite day camp to chill at, Frozen Oasis. Regardless of being lucky to have averaged even a couple hours sleep a night, I was still able to enjoy the slushies gifted out, albeit perturbed by the terrible pour that could have fit into a rocks glass. Also lovely to literally help chill were the misters, soft color scheme of a light turquoise and grey, a metal dragon that breathed fire and us playing along with the kazoos that were handed out at the end of their performance.

Never good at wearing my mask, I rode around from there checking out art and hitting a few bars on the way to Dr. Bronner’s for a group shower. Backfiring from the original plan of counting on it to be relaxing and rejuvenating, the long line under the hot sun was making me feeling even more worn out, dizzy and worried about the ITP within twenty minutes of getting there. Adding even more to the bummer of it all, the guy from Mexico standing in line next to me seemed like an intelligent and interesting person whom I’d have enjoyed connecting with under better circumstances. I wasn’t able to enjoy the shower much when it was finally my turn to get in but at least I got to run into Annie, an old ridshare buddy from a previous burn. 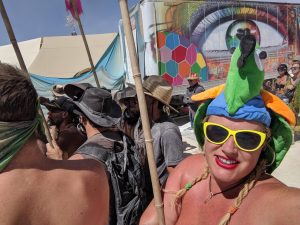 The three hour excursion starting at 11:45 AM sucked up prime time during the day but I had learned through the principle of Immediacy and to quote Forrest Gump, that you never know what you’re gonna get, so I was able to do an OK job of shrugging it off. On my way to half-heartedly find the Naked Tiki Bar from there, I took a sharp left when seeing the popular drinking and hang camp, the Petting Zoo. Trying to dull the edge of how shitty I felt with a little buzz, I somehow turned back into a Dr. Phil meets Dr. Ruth sex therapist for a straight and gay man almost as soon as my buns were seated. No matter how burnt I was and how much I was depleted socially, I still got a rush when I felt like I was helping others. So there I was until the sun started going down, giving up on the idea of making it to the Naked Tiki Bar all together. 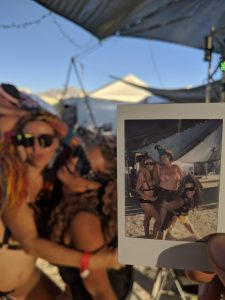 I had been dreading the long ride back to The Swan to head out with the crew for the man burn but it turned out that wasn’t going to happen anyway. Making my way to Spanky’s once saying my farewells at the Petting Zoo, I stayed longer than expected because, well, that’s what always happens, and also because one of our campers had a heart-stopping seizure and needed CPR. I would have felt like an asshole if I bolted so instead I used it as an excuse to stay.
Hanging with the couple who had shown interest multiple times in hooking up that year, it was a mix of both feeling discomfort and delighted at the situation while also a little resentment that I felt like we were all of the sudden playa-dating without my having even been consulted to see if I was into it. Relationships are already challenging but add in the aspect of such an unconventional community and it’s even more mind-bending. I did indeed dig them a lot as friends and wasn’t opposed to hooking up if the situation popped up organically but I was into the friendship aspect a lot more than sexually or romantically. I still wish that I could just feel more strongly one way or another, dammit. 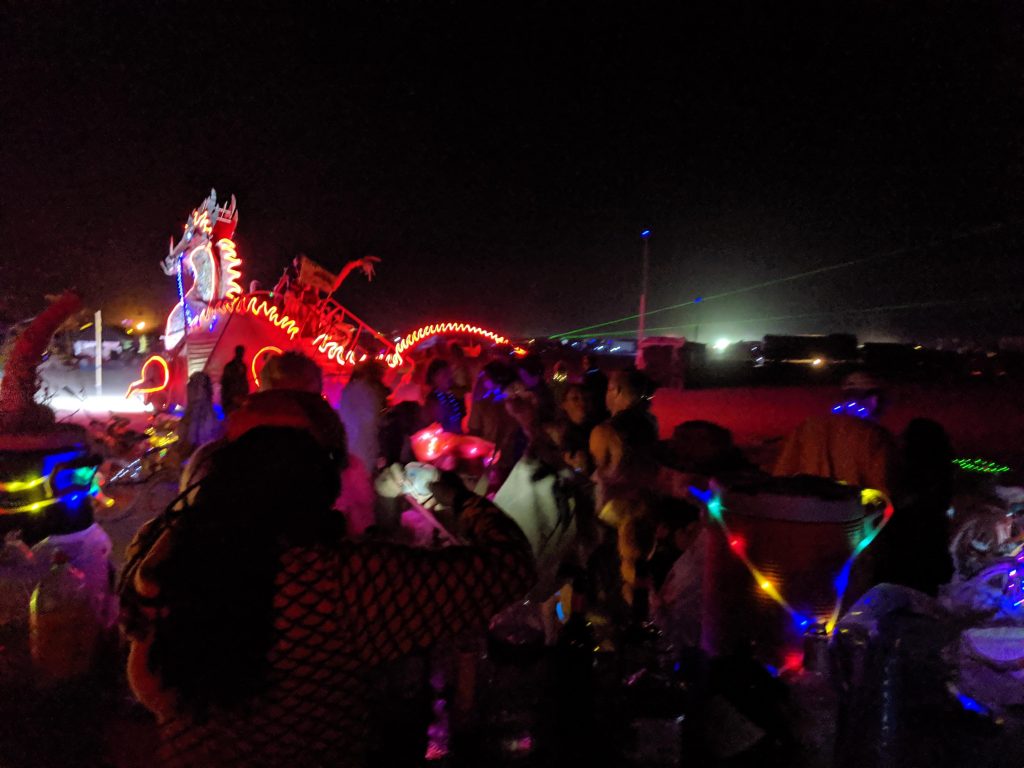 The sun went down and it was finally time to head out to the man. Biking alongside an art car that some of my campmates were on, we eventually stopped to climb up on a taller one to watched the spectacle as the fire conclave danced. Spoon after, the arms of the large wooden stick figure with an upside-down triangle for a head raised as fireworks started to shoot out of his body and then a grand explosion lit him fire. It was still the biggest communal party I had ever been to in the world, even if I was too donezo on that particular night to be feeling the spirit. Still knowing when we were done with the merriment there that my body was too out of whack for sleep anyway, I gave up on the idea of even trying. I was sick of adding more misery to the exhaustion and definitely didn’t want to miss out on yet another night while I just laid there in frustrated despair. Choosing instead to stay up all night partying back at Spanky’s, it was more of the same but a “same” that I loved. Even through the haze of my zombie state.

SEPT 1 – SUN
Aha the day of the temple burn. Thank God. I was doing my best to stay present through meditative reminders that I was in the most important place in the world to me. Like every year, many of us were just fighting to just get through it at that point. A notable about of seasoned burners even left every year once the weekend (Labor Day weekend) hit. Being a year of extra miserable exhaustion for me, it was the first time the thought didn’t appall me. It was also the first time I realized that maybe the reason I never noticed the “weekend warriors” who were notorious for only coming with the goal of more superficial partying was because I was always too worn out.
I’m sure I started the day the temple was to burn at the Swan like usual but honestly, the whole day is pretty blank. Maybe nights were easier to recall because they were such a reprieve from the relentless sun and it’s inescapable hellfire heat. An unfortunate byproduct to such a level of exhaustion, the temple burn didn’t do much for me. The after-party at Spanky’s called Swine Bar where I bartended for awhile was my favorite event of the camp, though, so that was still a little fun. Especially having the little bit of space in the middle of the crowd that tending bar provided.

Barely knowing where I was, we kept going until dawn. That included ending up in one of our camper’s trailer for what I was to find out was one of his notorious after-parties. Two words: body bumps. I was probably just off my nut and there wasn’t any good reason for it but at one point I took the man of the couple I felt like I was “playa dating” outside of the cramped trailer so his wife could have a little space to wile out. That’s when the two of us started bickering in an almost comical drama-agro way about pretty much nothing. It’s definitely not uncommon for folks to be falling apart by that time in the week. Putting two colorful and passionate people together on top of that and, well, there’s some extra fireworks. Add to all of it how if an attempt of any sort is made to control or take ownership of me, it just adds dynamite to those fireworks. Flash to the future for a second: yes, we’re still pals and talked it out after letting the playa-dust settle. 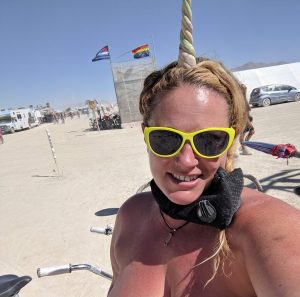 Back to what had become the next morning, our continuing to argue without his hearing my comments about needing to get back to The Swan to pack up, I finally had to jam at dawn with him and another male camper in tow as I petaled across the playa like the crazy pissed off woman I was to pack up before Glenn came to get my stuff. Only being half-way to having my physical shit together (definitely not mental) when he showed, he was understandably agro about it. To be fair, he had actually already showed up that way thanks to committing to too many people and his wife ending up hating the burn. My not being ready just made it worse. That didn’t justify his leaving some of my stuff at the end, though. Stuff that included the incredibly sentimental cape my mother had made me. I wouldn’t have even known until days after getting home if another camper, first pissed off thinking I had left junk for others to take care of, hadn’t told me. Being too tired and feeling too shitty later in the day to think about asking Mia to take that stuff home, I ended up throwing most of it out on the drive back to Reno anyway.