Living Like a Traveler at Home – Mucho Video & Picture Edition 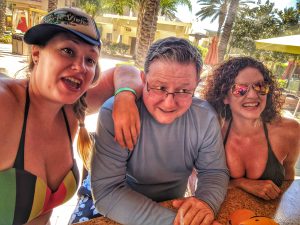 Finally home and falling right back into the category of “no rest for the wicked” , I flew into San Francisco and went straight back to putting in a couple hours behind the wheel Lyfting on my way to the casa of Aaron and Brigit, my burner pals, (and a second home of sorts for me) in the Santa Cruz Mountains. San Diego would have to wait, though the excitment of finally being able to check out the idea I’d had for years of flying back and forth every week or two did help to fight off too much homesickness. A new goal achieved that almost instantly proved too exhausting and expensive to keep up with once at it.

Between driving for rideshare and studying for the work I was to do with teens in India over the summer, I didn’t have much free time. Even so, Brigit, Aaron and I managed to find some fun to get into during the small windows I managed to carve out while there. Pedicures, our coveted hottub coctail hour of skinny-dipping under the stars, St. Patty’s Day, a dinner party, my favorite Felton log cabbin bar and Pedelyte to help recover from it all.

Once back in San Diego, I was excited to move into the new place I had found for (what ended up only being) the next month at home in OB. A spot that would end up costing me $450 more than I had budgeted, half-week’s pay (ouch), but worth it in order to avoid the confusion of figuring out an unstable daily back and forth amount. The roomie was also super flexible and chill which was appreciated. Plus she had doggos for me to love on.

Still forever trying to catch up with my writing, I was back in full school mode while still studying for my new gig. Visiting my favorite cafes along with dog and housesitting helped to get some quiet time for those things but my social and family life, along with catching up with that beach town that I loved so much, still (poor me) consumed an ansorbinant amount of my time.
So did falling in love.

Stephane and I were magic. We both swept each other off our feet to a place that brought old black-and-white romance movies to colorful and vibrant life. Our kind of chemistry put those around us in a whimspical state of euphoria. Minus the subpar sex life (but at least he tried), it was as close to perfect as I’d ever had. He not only admired me, the lifestyle I was leading and my dreams/goals but also supported them. He was also just as busy with his multiple companies, tennis and properties as I was with my stuff, which meant that we didn’t have the constant issues I’d in the past of lovers suffocating me.
So yeah. I went from the person who never falls in love to a level teenage girls dream of.

As mentioned, I was exhausted from the commute back and forth between San Diego and San Francisco within a couple trips. I’d imagine that to be, in large part, because of lack of routine and needing to figure out last minute when it made sense to go. A detail that made travel expenses jump from an expected $200 to double that per tri0. Ouch x 2. To triple it, I found out that I needed $1,000 in vaccines that the company I was to be working for would not cover. At least if I wanted to follow the reccommendations of the main immunization and travel clinic of San Francisco. Something my new regional director, concentually, hinted at me to not get in order to avoid overhead. Direction that still bothers me two months later. I’m 40 years old and don’t know my tits from my ass in regard to diseases in India and which vaccines to get in order to protect myself. Sorry dude but I’m trusting the professionals. Extra cash to buy another sari or two ain’t worth risking my health. And I know you mean well but I resent defending high overhead by reccommending otherwise.

Flying back to the old SDizzle again, I headed directly to my homie Bradley’s boat to hang with him and his girlfriend (who so happens to be one of my favorite gals) Juliette. It was fun watching the rideshare driver be surprised at how close it was (the airport is along the water downtown) and that there was a large sailboat pulling up to get me. Score for putting a smile on a random person’s face. Daily goal met.

Back to the Bay once again (head spinning yet?) where I managed to catch a comedy show by one of my favorite comedians (Kathleen Madigan) in Napa and then SD again, Big Red took me out for a Brothel & Bar history crawl in the Gaslamp quarter. I also got the chance to hang for one of Nikki & Brent’s son’s birthday parties and cheer Nik on for a thriathalon she rocked. Something she was to do a repeat performance of a couple weeks later. Kick-ass crazy woman.

Somewhere in there it was May. The month of my parent’s and sister’s birthdays as well as the anniversary of when I had lost my fur-baby in 2015 and four people the year before. Relieved that the losses (that will probably forever haunt me) didn’t take over the celebration, we had a great time at the pool at Harrah’s Resort & Cassino, starting with just Wendy and I so we could get our grown-up time in (AKA: coctails) and then were joined by our parents and my niece’s a few hours later.

One of my weeks in So Cal was consumed completely by an intensive WAFA (Wilderness and First Aid) certification course. It was the first time I met the man who was to become my local director and he instaintly rubbed me wrong. My instincts had me on alert but I told myself that it may just be because I had an aversion to Marines (he was a vet). Reasoning that, based on past experience, I would be able to be tolerant, compassionate and professional regardless of what was to come, I also tried to tell myself that polar-opposites have different strengths to offer which can create a kick-ass team as a whole.
Another flag was how obvious it was when he talked about the other mentor that he, at the very least, had a big crush from when they had crossed paths the summer before. I wouldn’t have been all that surprised to even find out they had even already danced the horizontal hokie pokie, minus the details that he was physically unattractive and socially awkward by traditional standards.
I hoped for the best and even reached out to give him rides along with going out to an awkward dinner with him and one more colleague for the sake of team building. What could I do? I tried and I tried and I tried but holy shit did it turn out to be worse than I ever expected. Just wait until that blog post of horror comes out…

Things with Stephane and I were ramping up. He and two of his closest friends headed down from Orange County (where they lived) to go with me to Brent’s birthday a week or two before leaving for India. A ton of my closest friends from our twenties and also my family (as far as he knew) were going to be there.Thank God they (my family) pulled out thanks to my mother being uptight about his being separated as opposed to divorced and sister not wanting to go after I got upset about her bringing Sean into my safety circle.
Drinking champagne before heading over, one of Stephane’s friends raved about how good we were together and what a good guy he was. A good time and good vibes that were to continue until a couple hours into the party. Drinks kept flowing, friends were made and the laughter amped up. Somewhere soon after, my world crumbled. As the minds of most women work, at least in my experience, I don’t just shrug and let it go if something seems to have even a little stink of fishiness. Instead, walls stay at least a little up while I bide my time, keeping myself in a “we’ll see” mode.
I had been in that “we’ll see” mode about the details of his separation since first finding out about it. His daughter, being an Olympic-hopeful for volleyball (according to him) and the kind of man he was, I could see how he could still be supporting his supposedly-separated-wife as she played manager to their daughter, but also knew that I was giving significant trust and was taking a big risk.
Stephane, once drunk at the party, said something that put me on alert at a time when I saw the door open to get a more honest answer. So I asked straight out in that moment of seeing an opportunity to finally get the whole story. And he responded.
Yes, he was still married.
Instaintly breaking down in alcohol-fueled tears, I refused to let him say anything more as I demanded he gather his friends and leave. Juliette showed up soon after, unknowing to what had happened, but was the one to sweep me off the floor, even without the details. Most of those people who used to be my closest friends didn’t even check on me as it happened to see if I was OK, let alone send me a text the day after. Another harsh reminder about what happens when not around to nurture relationships. C’est la vie. 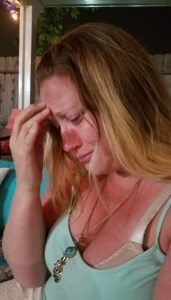 Wendy had been through a lot with the type of guys she had dated and surrounded herself with. It had hardened her to men and made her defensive toward any sign of risk. Sister-syndrome likely making it worse, she had been against Stephane and my putting myself out on such a long limb since the beginning. With a question the day after the big reveal that was so obviously leading toward the opposite answer, she asked me if I regretted it. No. I did not. I would risk myself over and over again for something so wonderful. Even if only for a moment and even if not totally real. Sometimes, in a world that can be so cruel, it can be easy to forget that the best and most beautiful things are just as big abd worth it all. The look on her face made me think that maybe I had reminded her of that. And that started the strings of my heart to already start pulling back together again.

My mind has always shut out the most traumatic experiences for a few months before having enough distance to process. It gave me those last couple weeks to hang in OB with loved ones (including the mermaid who was up for a few sweet weeks), hiking in La Jolla, cheering Wendy on with billboards I had made of her face while she ran the Rock and Roll Marathon, dinner at Cafe Sevilla with Big Red that was followed by salsa lessons (in which Mom and Kate joined us later), wine tasting and a very satisfying afternoon of organizing my storage unit. The closest thing I had to a stable and constant space of my own, it gave me a great sense of peace and getting my affairs sorted right before leaving again. Even more, when my heart needed sorting as well.
That was it. Once again, it was time for this free Robin to fly.