Getting to Burning Man – Early Entry 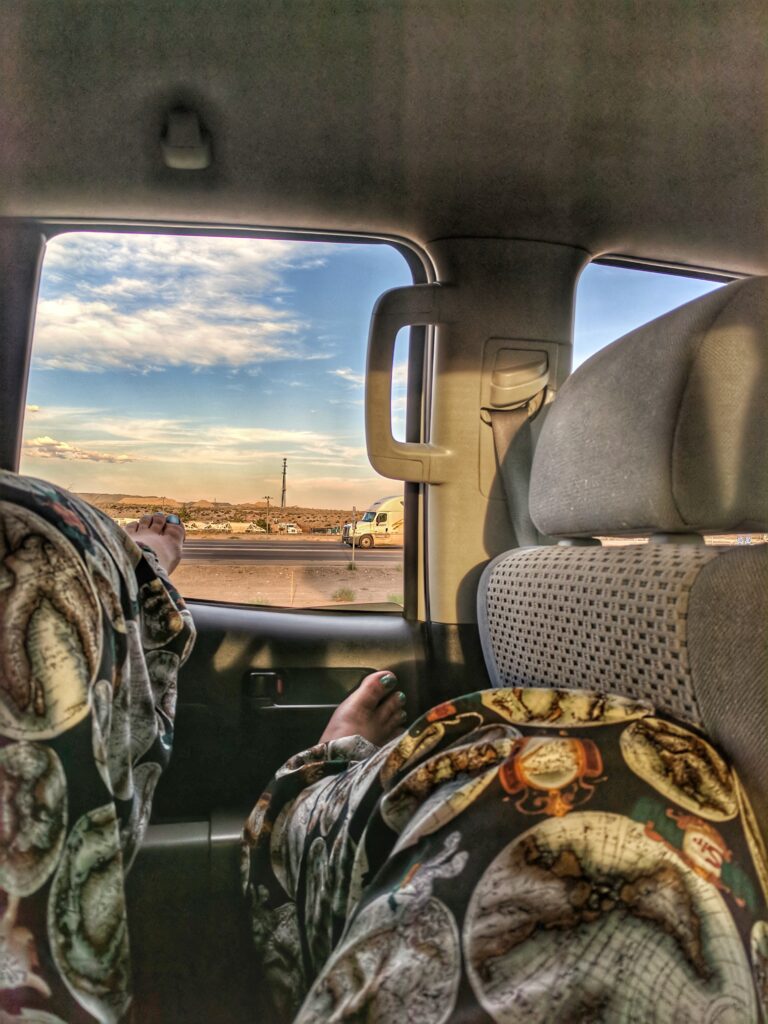 Yes ladies and gentlemen, I am now officially three burns in. Whoop whoop!

As is customary, this one was a doozy full of high highs and low lows with both sides being packed full of self-growth, fun, exhaustion, hell and learning about myself. Something proven for weeks before leaving by the intensity being dialed up through avenues such as buying and making supplies and costumes as well as working twelve hours a day right up to the day of takeoff to pay for it all. Add to that my not being able to sleep the night before and I got my first unexpected twist by conceding to the reality that I didn’t have the stamina to create the dust-combatting cool-crazy braided hair pattern I had planned. A bummer example of how we can’t have it all in a world of the never-ending playa list. Unless “having it all” was referring to what felt like the entire playa on my head.

Finding a rideshare through an online Facebook networking page for such Burning Man needs, the two burners who were to be my road-dawgs until 3 AM two days later arrived somewhere around 8 PM. A little later than expected but not uncommon. 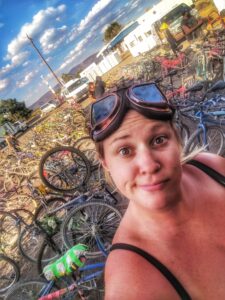 Especially when it comes to the intensity and detail of everything that should be done for this particular event. That late arrival may not have been a flag, especially knowing that I’m not great at being patient, but it did set a platform to launch the oddities the man driving/providing the transport was about to bestow upon us two ladies. The first not-so-small sign soon after being when Jewels offered to let him use her extra bike to which his response was pretty offensive in that he was so picky about it, it almost felt like he thought he was doing US a favor. OK, whatever, but it did have me scratching my head about why he hadn’t figured out one of the most foundational basics (bikes are our cars out there) before picking up the two of us commuting in with him.
Follow that with stopping where his friend was storing his car and the arrangement began to fall farther down the rabbit hole. Chaos isn’t too weird when it comes to Burning Man with the ridiculous amount of detail and out of the ordinary personalities but when it seemed like he was actually cleaning out his car, it took some effort to not get grouchy. That was weird. 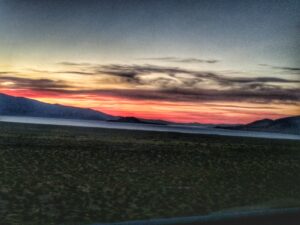 Getting to/from the burn is a trek within itself. Then, once you arrive to the entry line, it’s nowhere near time to exhale. To get through that usually takes hours and then you have to find your designated spot on the playa and set up camp. I’ve begrudgingly gotten used to exhaustion being a part from before until after the event with setup being the worst. It should be said that I’ve heard it gets easier once you can start accumulating stuff, but with my travel, that ain’t likely to happen any time soon. 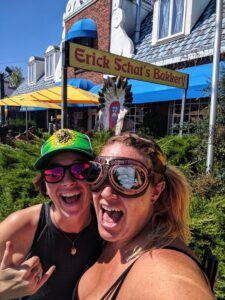 Making what felt like a million stops on the way in while also expecting us to pay equal gas despite the trailer he was hauling, our host left us scratching our heads even more when he seemed to want to stop for everything from flip-flops to an expensive grocery store to grab a bite (though he did buy us all ice creams 👍) to bike lights. It was so bad that we even had to stop multiple times to find a place to print out his ticket. HE HADEN’T EVEN PRINTED OUT HIS TICKET! That could have tacked hours onto the trip if turned away due to problems pulling up the ticket digitally. It’s happened before.
By this point I was going bananas and didn’t know how Goldilocks (playa name) was keeping her cool when even she had made a comment about wondering if we were ever going to get there hours before. By the end I was responding to this dude with sarcastic humor and had to completely keep my mouth shut in order to stop myself from flashing on him when we got pulled over and sniffed out by police dogs right after he had disregarded her comments to slow down to the speed limit so that exact thing didn’t happen. 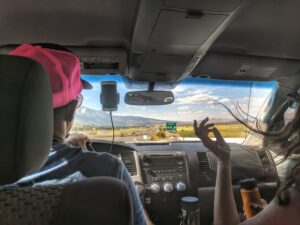 Lucking out with her as such a rad travel companion to balance out that of the opposite, she had kept him chatted up with her relaxed and patient attitude while I (surprisingly) slept most of the way. While still not happy, I couldn’t help but change my train of thought to a certain extent with her reminder that such oddities were all a part of the adventure. Thank God for that woman and all her awesomeness. 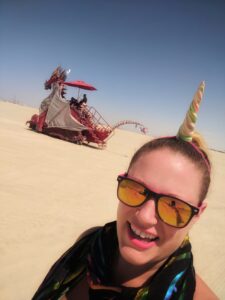 Getting to the camp spot at my theme camp, Leopard Martini Lounge, where I was to set up, it quickly became apparent that I should have given the equipment a test-run when pulling out my supposed tent only to discover that it was nothing but a screen structure. Something I would find out later was likely because one of Julia’s friend had previously borrowed it and not returned all of the pieces. Super shout out to both of my two road-warriors, even (begrudgingly) him, for being bodacious burners by helping me to figure it out somewhere in that 3 AM hour when noticing my struggles.

Next up, after we had set up and taken that back down, was when the new easy-up Jewels had ordered proved to be missing any way to zip the walls shut as she had thought. An important detail to keep dust out, though it wouldn’t have mattered much anyway, as the reality was that the structure caused too much of a threat to blow away if fully erected. Something I should have been aware of. My bad. 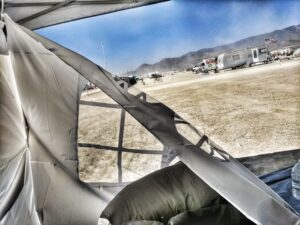 Sleeping with only one of the walls half up and half wrapped around me for protection from the harsh environment (thank Thor there weren’t any dust storms), I was mentally bowing down to one of my new campmates when he lent me a tent the next morning.

Side note my FRFers: it was around there that “Fuckin Jewels” was born. A playa name she was to get a kick out of even before getting there.

Burning Man is one of those “expect the unexpected” places where we learn a lot about ourselves. I learned that I was nowhere near as self-sufficient as I had thought and had never really handled everything on my own for or at the burn. Something that became painfully apparent as I constantly fumbled my way around trying to figure out how to do without the key necessities Jewels was bringing in when she got there a few days later. Situations that became a joke every time something went wrong or was missing in that it was labeled as her fault no matter how ridiculous. Can’t find your favorite rainbow unicorn nipple covers? “Fuckin Jewels.” Stub your toe? “Fuckin Jewels!” Don’t know where you put down your cocktail? “FUCKING JEWELS!” At one point my campmates started to wonder if she was even real.

Instantly both impressed and grateful for my new campmates, it was pretty cool to be with a theme camp where many of the folks had been coming for over twenty years. Amongst other reasons, because it helped drive home the awe of how much more Burning Man can be than just a party. 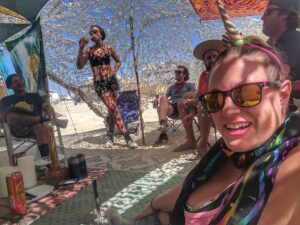 Something that was driven home even further by spending time on the playa before the chaos that was to come once the event technically started. Hanging out in between trying to help set up camp on that first day included fun random stories such as one about how a woman had once called a puddle of water on a chair a coochie wash and another from one of our geologist campers who told the tale about how a student of hers had shot a bear the year before. Anyone else picturing The Revenant? 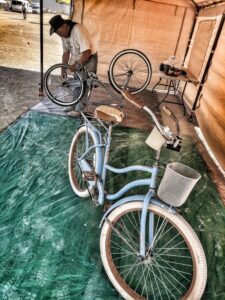 Doing my best as a camp newbie (which means mostly standing there clueless and confused) to pitch in toward helping to construct the bar and three-headed dog art car along side of all of the camp’s incredibly hard workers, I even lucked out when one of LML’s old-timers, Sweet Cheeks, helped me fix the flats on FJ (Fuckin Jewels) and my bikes in his bike repair tent. Random note for future burners: try to stay away from Walmart beach cruisers. Unless you think flat tires are fun, that is. 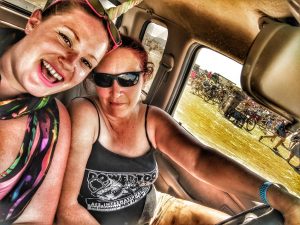 Keeping in line with the dreamlike randomness of the burn, the first moment of witnessed on-playa drama came when a waisted burner got really upset thinking another campmate had cut into the front of line for a burger and just couldn’t get over it. Another example of how such an extreme and over-stimulating experience provides lows as well as the highs and they don’t necessarily make sense.

The spirit of the burn took no time to kick up, even from the first day of hitting the road. Randomly jumping on a dragon art car full of Germans in between camp duties that first afternoon in the midst of trying to find camps of burner buds Cassie, Brigit and Aaron already seemed the norm. So did B randomly finding me lost after visiting C with a huge blister on my heel from new playa boots. I was finally back there rolling in the dust. I was home. 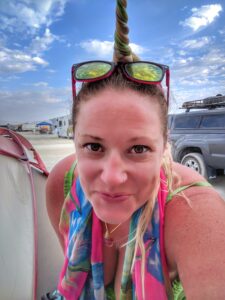 8 thoughts on “Getting to Burning Man – Early Entry” 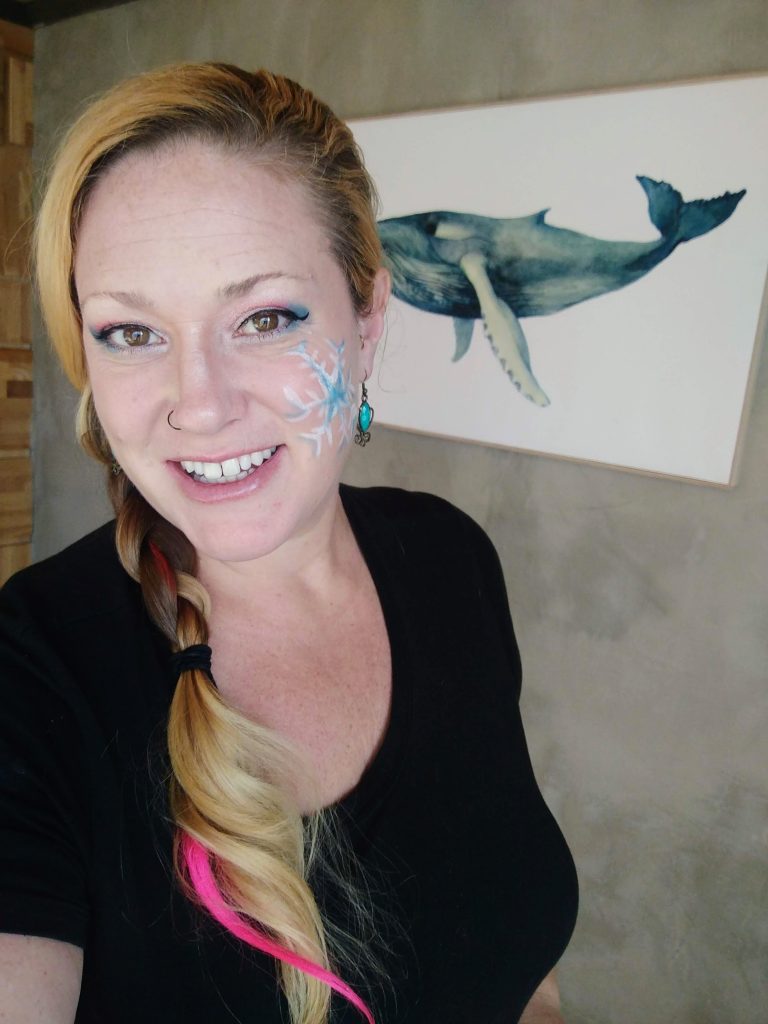 Nov 2020 – Making friends through animals is the best.