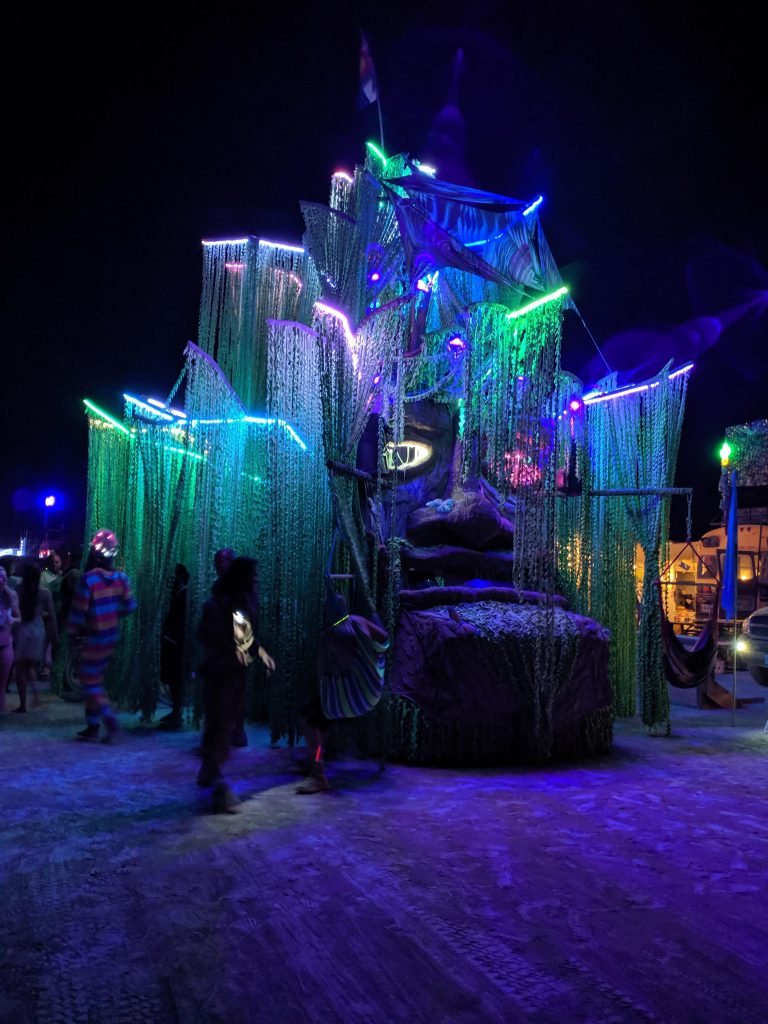 AUG 28 – WEDNESDAY
Following my favorite night was my favorite day. The morning started, as always, by hanging with folks at The Swan and PolyParadise until Spicy surprised me by showing up. Something he had attempted a few times before and would a few times after, usually without finding me. As luck would have it, he did on that particular day, though, and we were to spend most of it together. Dragging him right away to a camp controversial for offering biodegradable glitter, I had first been introduced to it my second year with the Frenchie friends I’d camped with and was determined to partake in that herpes of the crafting world fabulousness at least once again. Adorning each other head to toe, we then headed to Go the Fuck to Sleep in Hushville with stops along the way at camps that included one with a Russian roulette style game of choosing a flavored shot that ended with my taking one of disgustingly warm Cheese-It vodka and then headed across the street to a boring lecture on sexuality. Boring, I should say, for our level of experience. We made it to Brigit and Aaron’s camp after that for her popup event, Cougar Camp, where us ladies would all dress in leopard and sit out along the street to tempt guys (via Brigit yelling through a blow horn) into stopping to dance for us with a cookie as their prize. My favorite part for the year being a tie between Spicy being our pool boy and when chicks passing by would stop to join us. 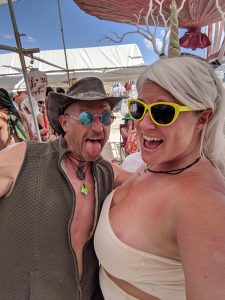 Getting myself in a pickle with an actual pickle as Cougar Camp headed to a close, Spicy and I walked across the street to play a game of bobbing for pickles where the rule was to slap the bobber across the face when they came up for air. I didn’t understand it and thank God he wasn’t comfortable enough to really go for it despite my insistence. Receiving a small yet sobering smack, it was a slightly annoying experience that still makes me think of idiot frat boys and Marines of my past causing drunken brawls in bars. Moving on. The glitter camp and Cougar Camp had been main goals for the day but a goal for the entire week was to make it to Orgydome with him, so off we went. Before you get too excited, don’t. After the first five minutes, it’s nowhere near as wild and exciting as you might think. It’s mostly just a place for couples to have a mattress in air conditioning in a communal room with the occasional scene that’s more exciting than that. We’ve all experienced sex. After a couple minutes, it loses a lot of it’s excitement. That being said, it was by far the favorite time I’ve ever had in there and I’d imagine we were one of the rare who actually did put on a small show. 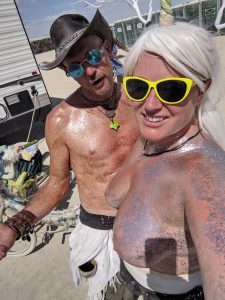 After getting past the mandatory lectures and speeches at the end of the line about acceptable behavior and measures taken to ensure them, we got to the main waiting room where we took advantage of cuddle couches and massage tables where I treated Spicy to what may have been the most epic massage I’d ever given. Per his request, we then moved into the couples only room when our turn came for two and a half hours of smooth and sensual sex. His libido mixed with an impressive member good at staying at attention was an orgasmic mix (pun intended) for a session that was less about the intense passion I was used to and more about relaxed pleasure that sustainable for a marathon. Challenge was that, even though we were rocking it James Brown style instead of ’80’s glam rock, it was still plenty enough over a long period of time to run out of water. His not being allowed to stay inside the tent without me, we got a break pass for 15 minutes to run out barely covering ourselves (not that it mattered) and try to find some much coveted agua. Unsurprisingly challenging as water was liquid gold on the playa, we didn’t find any. What we did find was margaritas at a camp called Sharkey’s directly across the street and ice cream sandwiches that someone walking by was passing out. Giggling as we hurried back with me joking about getting even more sticky, we gave it another try, though that time in the “open to more” room. Giving it a go for a little while longer, we had unfortunately lost our steam, but had an impressive four hour experience over all so we were happy. It still puts a big smile on my face to think about. Especially the part where we were running around like crazed, giddy kids trying to get back before we got “in trouble”. 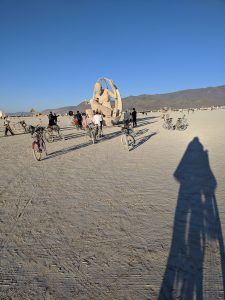 I needed some alone time after that to recharge. Not specifically from him, more because I always did. OK yes, partly because I needed to process being into him more than usual. The environment of it all and wondering what was real didn’t help with all those confusing feelings either. Still, I would have preferred it if we were in the same camp so we could go back to our own places within instead of knowing it unlikely to find each other again that night regardless of what we planned. With word of meeting back up at Spanky’s a couple hours later, I let my foggy sex-brain talk me into skipping out on the night Aaron had suggested for the two of us and Brigit for the off chance of spending more time of him. Yeah, I was “that” girl. One of the many examples of the principal of Immediacy, time seemed to go away and I had even almost ditched the plan myself to jump on an art car made of a black light tiki-style face with curtains resembling moss as hair. Whether he showed or not, I did want to spend more time in my second camp. Still, I was just the tiniest bit resentful for giving up the chance for a night with B & A even if I did get to spend it reconnecting with other friends that I hadn’t seen in a year. Two of which were a couple from overseas who surprised me by seeming to be interested in a wee bit more than friendship. An odd follow up to the happenings of the day but hey, it’s all about pushing boundaries and learning about ourselves…right? Maybe, maybe not but it was too much for me at th3 moment. Even if it was fun in theory. 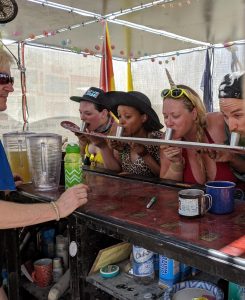 Starting, of course, with the morning hang in camp, I didn’t make it too far for my morning venturing the next day when heading to a camp across the street early afternoon to participate in a shotski where a tall dude on one side of me sent the short chick on the other flying by throwing it back too hard. His being so thoughtless and oblivious was one of those things that weirdly annoys me all these months later. Back to camp not too long after, it was my time once again provide some of the meal for camp. It was way more chaotic than the first time, though, and partakers seemed more entitled than thankful. I had heard that to be the case after main gates opened but it was still a bummer. I stayed in camp after that for a live music session at The Swan Brigit spearheaded that consisted of a Celtic jam band. Hiding by the bar with so much going on it, it was unfortunately all a blur. Exhaustion and over-stimulation were already enough to make my brain shut down so adding a boozy buzz meant that I barely remember saying hello to friends whose face I would only be able to see that once for the year.

Short but sweet, when later heading to Spanky’s for a night that included the aforementioned couple making a more direct attempt and a naughty cuddle puddle with us and a few others trying to awkwardly join in, I had another of my highlights for the year when opening the door to a blue room with lights blinking out from the inside and walking in to see a disco ball and other shiny paraphernalia covering the walls. I had heard of those mythicaly decorated port-a-potties for years but had never actually come across one. It took half a decade to happen but it did and it was oh so worth the wait!