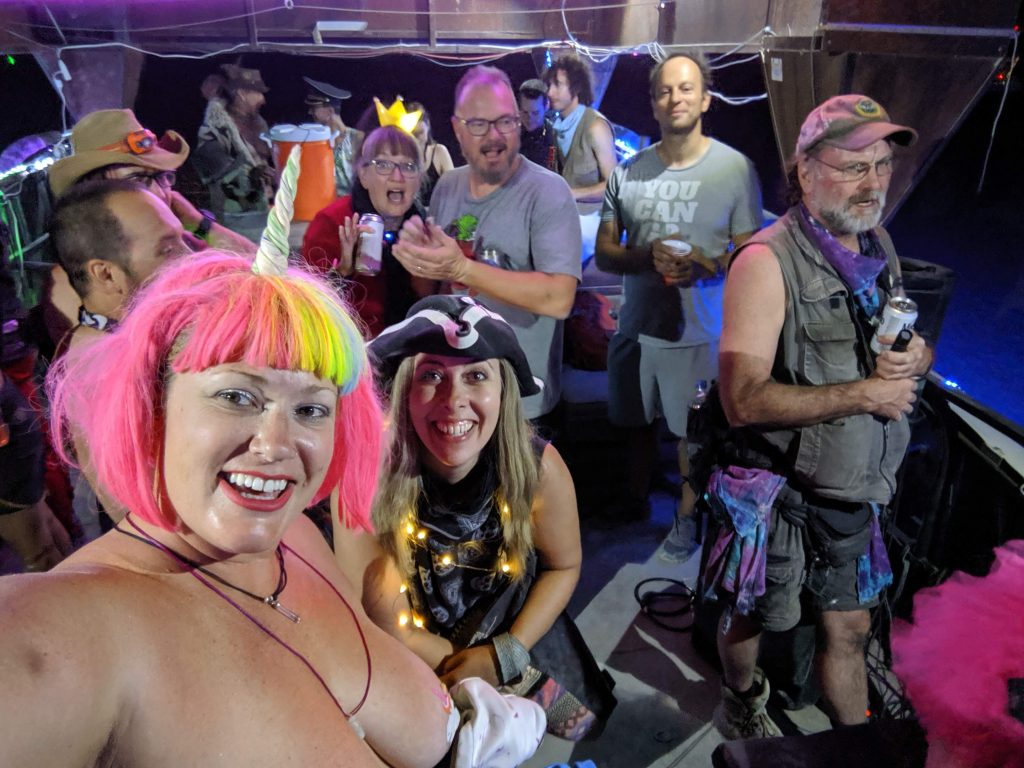 AUG 25th – SUNDAY
August 25th was when the burn officially started and the days were already starting to blur together. I was so worn out that I don’t remember much of what I did that day. I probably started at camp hanging and connecting with everyone and then biked around the neighborhood to scout it out, no doubt already having bike problems. Hurray for having bike repair camps close to us! It was too intimidating to think about getting to my other camp, Spanky’s, across the playa but figuring out that Mia’s camp happened to be right by me was a pleasant surprise. Especially since our phones had stopped working by then so it was going to be all physical coordination from that point on. Being so close was going to make it a lot easier to coordinate. Or so I thought. 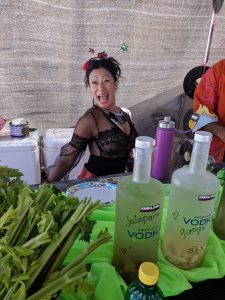 AUG 26 – MONDAY
First hanging with my camp crew for a couple hours the next morning, I then headed back to find Mia at her camp, Draft Punk, to be emotional support during the elaborate brunch she was throwing. Her ex from a previously serious relationship was also camping there with his girlfriend and she wasn’t sure how she was going to feel. After the impressive brunch with no sign of awkwardness, I then continued what was about to become ritual for the rest of the burn by finally biking over to Spanky’s. Getting back into the sex-swing of things as soon as I got there, I jumped into a volunteer shift bartending and had a dude with quite the splendid moves shaking it in his shiny gold leggings and scarf around his neck within minutes.

Getting lost on the way to find Brigit and Aaron later, I finally found their camp for a low-key hang that was only to last a little under two hours since they were already buzzed and winding down. Just sitting around chatting over Aaron’s lovely cocktails, Brigit pointed out an extra Kodiak tent a fellow camper had brought with the intention that she was going to talk to him about selling to me so I could have a decent place to sleep for the rest of the burn. An idea that never materialized but brought some a relief to think about, even if just for a moment. Another compadre of theirs, one of Aaron’s innocent crushes and head of B.E.D, showed up on a OneWheel resembling a tipsy character out of Star Wars with her head-garb and maroon genie pants that slit vertically along the legs and joined at the ankles. “Loaning” her my headlamp on her way out shortly before my own, I knew it was likely the last time I’d see it. I wasn’t left in the dark, however, as I had my disco lights and that’s all I ever seemed to need. 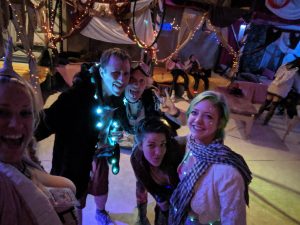 A few of us from Spanky’s went out later including my girl, Kelsey, who played in the Black Rock Philharmonic and was going to be a roomie at the hotel after the burn. It ended up being the first super late night, not heading home until around 4 AM after Kelsey, some of her friends and I made it to a camp with aerial acrobatics and I took my leave both for alone time and to make it to the Black Rock Roller Disco. My night was soon to end upon arrival though when, like every other year, I couldn’t find my size skates. Probably for the best given that hitting my head could have instantly killed me since the ITP was hitting hard again. I knew it was back to bad but wouldn’t know exactly how much until after the burn.

AUG 27 – TUESDAY
Speaking of that pesky bleeding disorder, I finally forced myself to face the music and find the makeshift series of connected tan tents that created the Rampart hospital to get checked out the next day. Already looking to be a casualty of the playa herself, the doctor hobbled her way over on crutches with a hurt ankle when it was my turn and I had to fight back the emotions of being touched by this woman who cared enough for that world of ours to still be helping even with an injury. I was pretty quick to snap out of it, though, when she didn’t know about ITP let alone what to do about it. There was no way to take a tiny sample of blood and test my platelet count there. A little surprising as it seemed like such a fast and minor procedure at Dr. Vlad’s office. She told me I could have a special pass to leave the burn for a “real” hospital and come back or I’d have to be air-lifted if I needed immediate help. I knew it was unlikely that I’d make it back if I left for the playa. That meant that I wasn’t going to leave. It may not have been an option to say goodbye to the burn but what could have been was increasing the steroids back to their original amount since I had just started weaning off. My instincts were telling me to do it but I instead trusted her as a professional when she told me that it was probably best to keep the dose where it was. Steroids were a nasty business so I wasn’t all that surprised. I still wonder all these months later if my numbers would have been so bad when I got home if I had just followed my intuition.

I headed back to Draft Punk when I was done to spend time with Mia as a guest bartender at one of her camp’s happy hours. Confused why she and the RV-mate/friend, Susan, weren’t around (she had been sleeping when I swung by earlier), the board she kept up showing where she was had been updated to say she was out and about. Super vague, though who among us knew where we were going to end up at any given moment out there. Puzzled about her whereabouts but enjoying the company of a fabulous man who was still way too put together for someone who hadn’t slept the night before, she finally showed up about an hour and a half later having gotten the days of her shift mixed up. After that, she instantly disappeared again. Where did I find her next? Looking out into the street, there she was dressed as a giant beer standing on a crate as she hollered at people through a megaphone to come in and have a drink. That’s my girl! 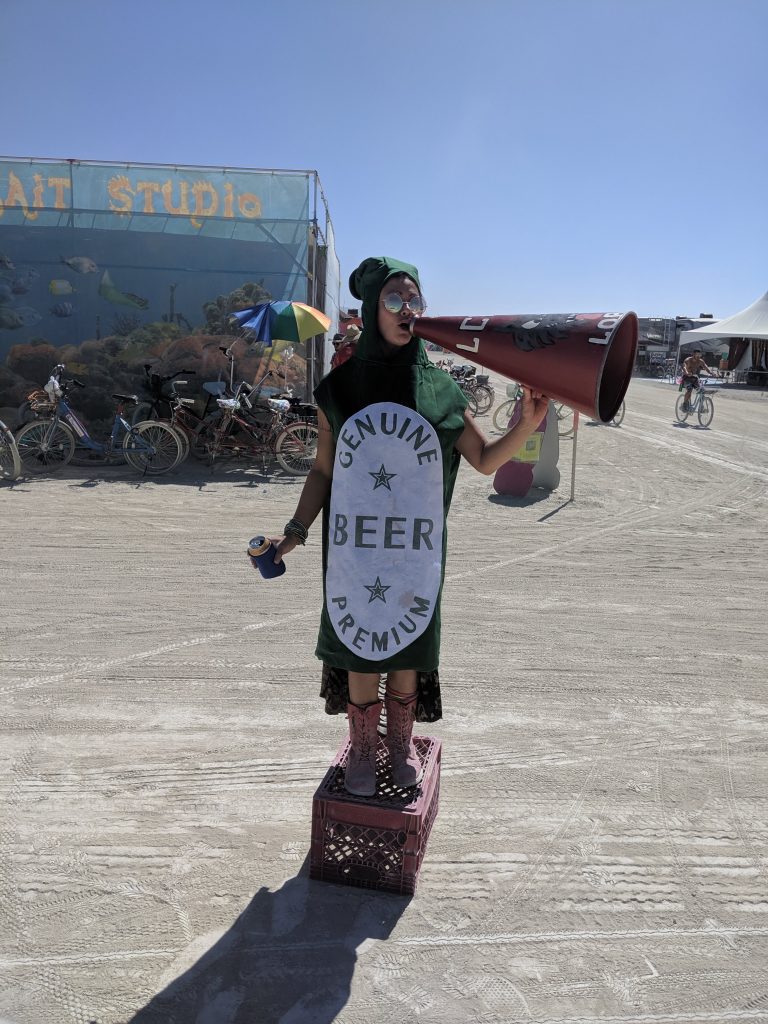 My fifth year and I still struggled with how odd it was to never know who I was actually going to end up spending my time with regardless of plans made before. The Swan crew and I planned to go out that night and I was able to talk them into going over to Draft Punk with me to pick up Mia and Susan. When we showed up the ladies were still getting themselves put together and taking selfies for fifteen minutes before we all finally managed to hit the road in a pack on our bikes (the equivalent of our cars out there) and lost them almost immediately. I raised the white flag and told myself to let go. It could be the last time I’d see her regardless of being camped on the same street but oh well. At least we’d had fun fresh material to cover when we got home.

The rest of the night ended up being what may have been the best of my burn. Rolling around on art cars was my favorite thing to do at the burn and it ended up being the only night I did it. To our surprise given that we needed to attach Disco Inferno’s two person bike to any that we were able to get on, we managed to make it happen almost immediately when ending up on my favorite car for the year, a super cool dueling piano bar. Later on, we hopped onto one that was pretty much a big bed where I was fighting to keep my eyes open and another one of us couldn’t. It was entertaining to watch given that he had been the one who always seemed the most pumped up. Entertaining, that is, until he bragged after about how he can fall asleep anywhere. Damn him and his not having my sleeping problems. Our group finished up the night with a bang both literally and figuratively when making it to Thunderdome. A fighting dome inspired by the movie Mad Max where participants are hoisted into the air to battle with foam-covered bats, I hadn’t been into it my first couple years but was finding it pretty damn fun that year. It was an amped way to end the evening just before the clock hit midnight. Still early on the playa but not for us, we then made our way back to camp. 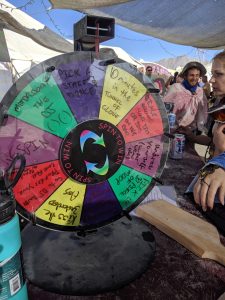