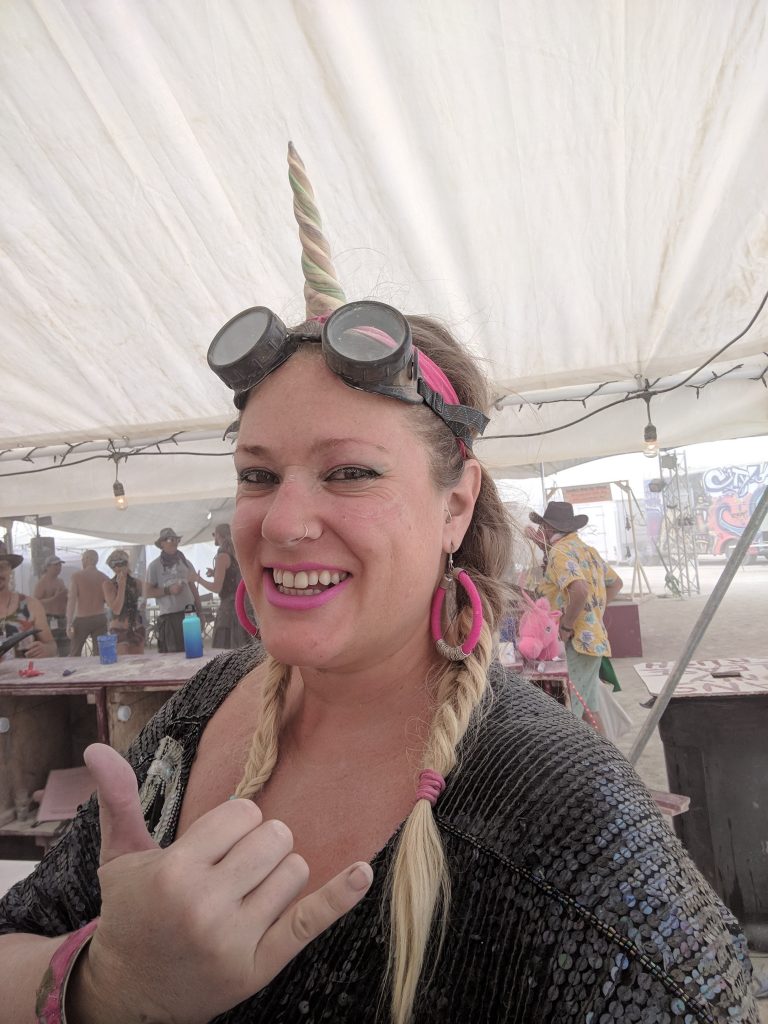 Waking up and driving the last five or so hours (which included a few stops for eating, gas, water and groceries) on that day, Friday August 24, 2018, we finally made it to the outskirts of Black Rock City. Pulling up to a line of loaded up often decorative vehicles full of burners on a two-lane road that lead to a dried up riverbed that, beyond our temporary city, had nothing except a tan-colored alkaline dust that was known for getting so far into every crevace that it reached our dusty souls. 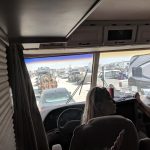 It only took maybe three hours to get into city limits from there, which was the main reason I was happy to be there a day before the main entry. When coming normal entry my first year on the Burner Bus, it had taken over ten hours to get in and it had taken about twelve hours to get out the year before thanks to an Amber Alert. It was always a gamble and I had learned to change my mentality to embrace it as part of the experience (might as well get out and hang with traffic neighbors) but was happy when able to avoid it. 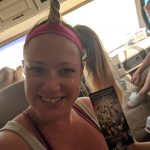 Knowing that we had two Burning Man virgins with us, my exhaustion was momentarily lost as I became majorly pumped as we pulled up to the greeters. Between not knowing what the deal of who these people were, the traditions they carried out and complications of being on the Burner Bus my first year, I hadn’t got my chance for the initiation our two gals were about to go through. Every year since then, I had lived vicariously as the initiation speech was given, virgins were rolled around in the dust and they were given a hammer to hit the gong. It certainly rang my bell in all the right ways. Most of ours, actually. To see people first experience the level of magic I had only ever found there was the kind of wonder that could bring us to our knees.

With the miserable experience of getting there and having to set up at night more than once in the past, my lowest of lows for those years, it was a happy relief that we had gotten there midday. It gave us time to build our individual homes for the week, mine being the second dropoff after Elena (aka: Glenda the Good as she was deemed for a burner name at warp-speed) at her Russian camp, You are Healer , and to either reunite or get introed to new campmates while helping to build our theme camps. A couple of the new guys I met, by the way, that I used the last of my favorite hot pink lipstick on.
After two more of my first new pals in camp helped me set up, a couple of Indian fellas from LA who were super excited to be there for their first time, Mia had found her way back over after getting set up at her own camp, Cheesy Porn. 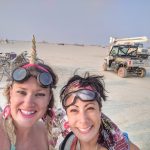 It hadn’t been far from my own, Spanky’s Wine Bar, but was still above and beyond to bring the things I had forgotten in the RV. As was all to common at the burn in regard to expecting the unexpected and it being so easy to bond, that quickly lead to hanging. Something that included a ride on one of my most-visited camp spots for the week, a Sybian. A fascinating (an expensive) machine in that all it looked like was a simple horse saddle with a lump (attachments are an option) that can be ridden fully clothed (if chosen) while giving women an intense orgasm. 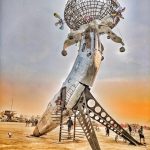 Adding to the gang of new burner buds was a couple who had almost immediately offered me the shower in their RV along with napping any time I needed. Crash and Rex were super awesome and, among the many I bonded with, the closer of my new amigos. In no small part, I’d imagine, due to the time Crash and I got to spend together with her bartending while I barbacked. We both took on those rolls a lot during the first few days. It was by far the largest camp I had been with and the burn brought out such an amazingly loving connectedness that it was hard to not want to give back and participate. 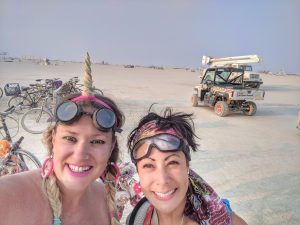 The next day was the official first day of the burn. After grumbling to myself about adorning my body with the weekly atire of a Camelback, a scarf to breathe through in dust storms, goggles and a whole bunch more necessities one never wants to be caught without (including a more heavy-duty mask in my bike basket and mist bottles to gift), Mia and I took advantage of the morning hours to bike around the playa. 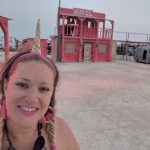 Myself, beyond the things previously mentioned, in nothing more than a fanny pack, unicorn horn and hot pants. As we peddled around checking out camps on the Esplanade (the main street all the way on the inside of the u-shape of the “suburbs” that included the biggest, oldest, arguably most fabulous and eco-friendly camps), we managed to find Hardley Saloon. A camp that had always been one of my favorites with it’s theme being an all-night whiskey bar and old-West style saloon. Svetlana even went on a date with one of their main campers when we met him at the SF Decompression event a month or two later. 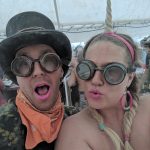 Once the temp started getting too hot to wander comfortably, I headed to Brigit & Aaron’s camp, Go the Fuck to Sleep. They were part of a neighborhood full of Rangers where I would, of course, be visiting a few times throughout the burn. Something I was particularly happy about that day as the worst dust storm I experienced for the year (along with a tiny bit of rain) meant that cars would be stopped at the gate due to visibility. Also holding them up was that more people than Nevada would allow were trying to get in. More and more examples of the ways the line could take so long. A big “whoopsie” on behalf of the org and why I was so thankfully relieved to come early entry.

In addition to finding shelter with Brigit and Aaron from the dust storm, it also provided one of my most entertaining moments for the year when Aaron came looking for after he got the feeling that I’d get lost on my way back from the blue rooms. Which I did. Opting to stay and hang back at camp later on with an “early” bedtime around midnight, the official day one was complete. 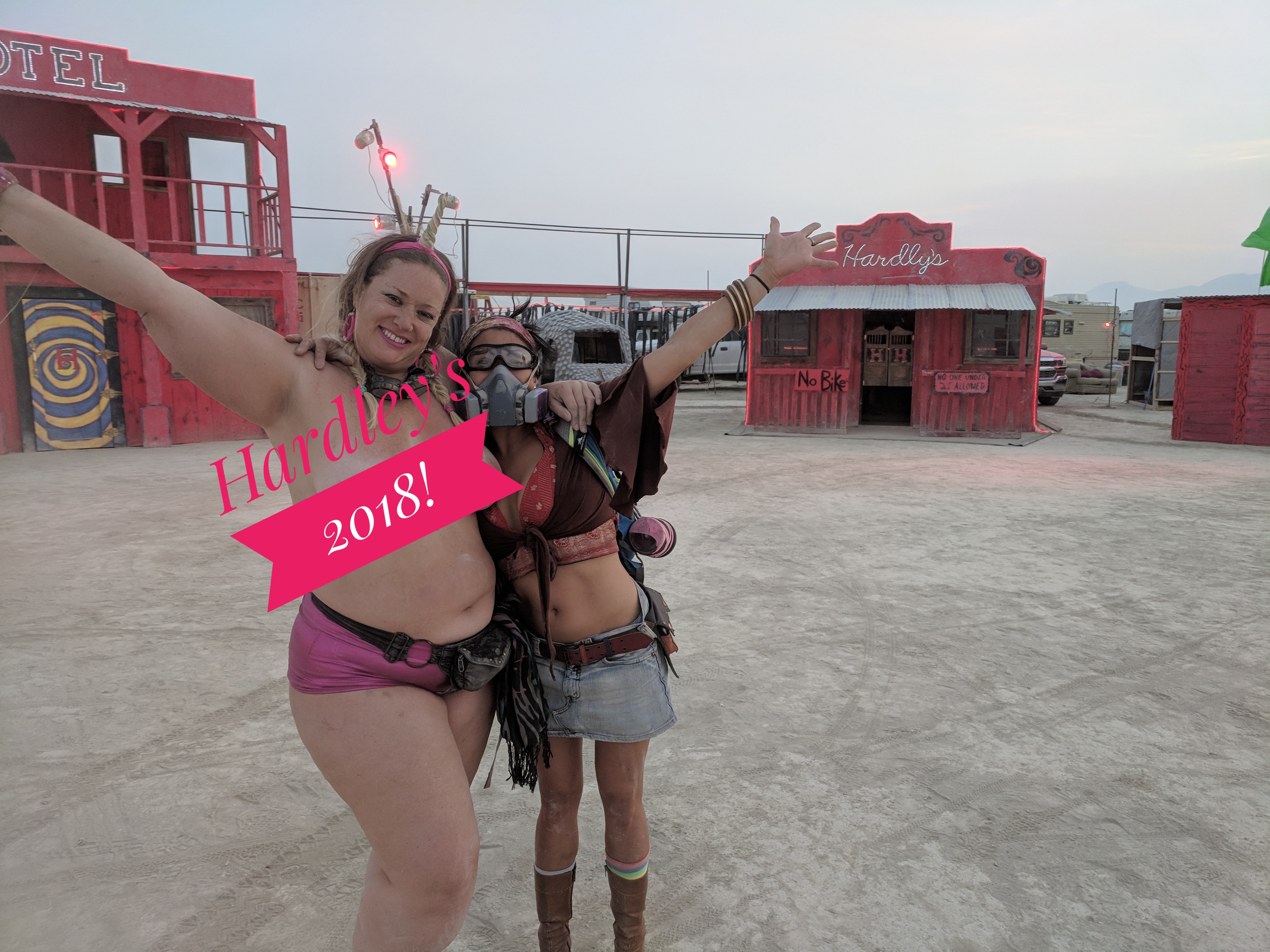 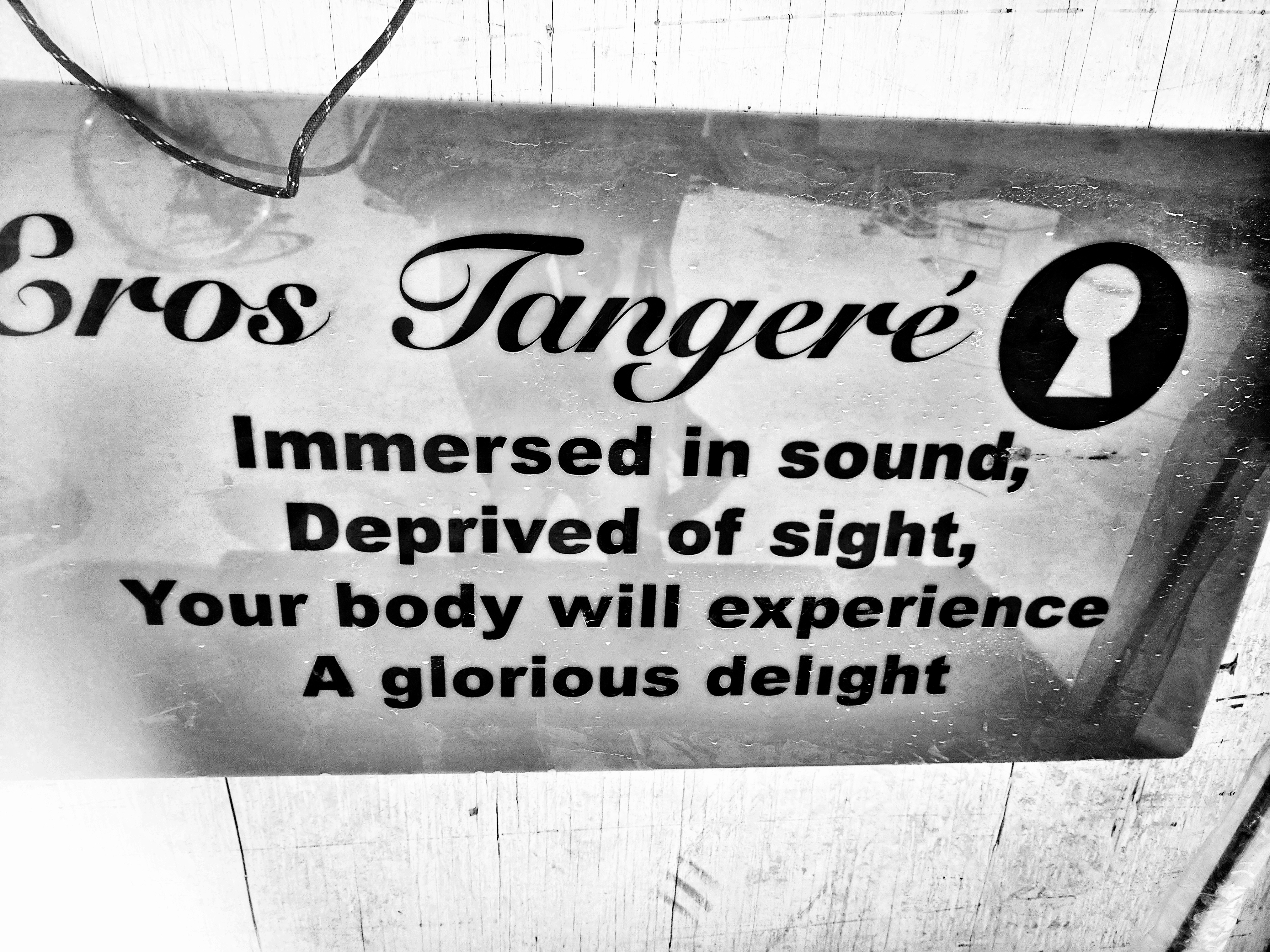