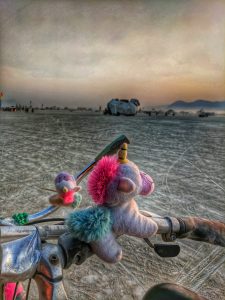 I often think about how much the burn is similar to the rest of my travel in that both create a foundation of constant learning, changing and adjusting. A continuous state of fluidity full of pleasure, pain, entertainment and the hot mess I seem to always become along the way.
One learning lesson that quickly hit home during the burn of 2017 was that coming early entry and also leaving a day or two late are likely to provide a more relaxed and balanced experience. Mostly for avoiding the hours of lines getting in and out but also for a few other reasons. To help build/be more involved with my camp and having more down time with them during the first couple days before full insanity kicks in. Also before I start wandering. Avoiding the hi[catch-instagram-feed-gallery-widget title=”Catch Instagram Feed Gallery & Widget” username=”free_robin_fly” number=”6″ size=”standard_resolution”]gh-traffic confusion and dust the vehicles coming in are kicking up once gates officially open ain’t that bad either. Last but far from least is the plus of avoiding falling asleep behind the wheel at the end with an extra night’s sleep. That is if I can deal with the sadness of the city being broken down around me. 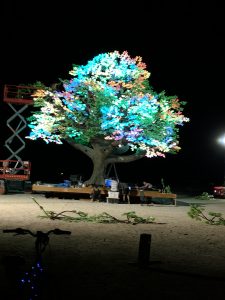 Being gifted the chance to watch the burn be birthed when coming early entry was a first and lead to one of my most magical moments of the year when I found my favorite art installation before it was even fully set up. The Tree of Ténéré with its LED lights changing color and ability to climb on/interact with it transported me into a magical place of “oh yeah – this is why I do this.”. The earlier to find that first happy moment the better as it is crucial to counteract the not-so-pleasant feelings that come with all of the work and sacrifice leading up to that point.
Hanging in camp pre-start date was another highlight of the trip for another reason in that I actually got to chill enough to see the love between campmates along with the depth both of individuals themselves and their connection to the burn. My soul needs the art, of course, but what the burn brings out of us – walls it brings down, humanity, equality and the connection to each other, is by far what has makes TTITD home.
[ngg_images source=”galleries” display_type=”photocrati-nextgen_basic_slideshow” gallery_width=”600″ gallery_height=”400″ cycle_effect=”fade” cycle_interval=”10″ show_thumbnail_link=”1″ thumbnail_link_text=”[Show thumbnails]” order_by=”sortorder” order_direction=”ASC” returns=”included” maximum_entity_count=”500″]
When gates were officially opened a couple days after my arrival and the inevitable energy amp that came with, a couple of us wandered off to check out the oldest dive bar on the playa, HOTD! (Hair Of The Dog) with its fun live band and a mist fan that was heaven on such a hot desert day. Also padding the discomfort was the shots of booze offered out of a stuffed dog’s dingaling. Weird, I know. A little too much for me but, hey. That’s the burn.
Later that night a few of us campmates left to explore The Esplanade and Deep Playa. For those of you who haven’t burned, picture this: the temporary city is a circle with the “suburbs” being half of the outer circle on one side and deep playa (nothing but art installations and room for art cars to roam) on the other. The larger and more grandiose the theme camp, the closer it’s placed to the inner-circle (as long as it did well in matters such as rating well with MOOP and adding to the community the year before). The most inner half-circle of playa without camps set up is known as the Esplanade. Here is where the open space and larger art installations start, though the “downtown” of the city, Center Camp, (carnival-style tent where you can buy ice and coffee) is randomly located in a different spot a few rows in.
The second official day was an interesting mix of the burn already buzzing but also not fully up and running since many camps were still being built and the activities hadn’t started. After looking for some that were, a new campmate by the playa name of Sugey and I finally ended up at a legit mist bar (pretty sure it was over 100° every day) that was practically raining in its large tent structure that had been set up while campers came by with champagne. One of the moments I am still most thankful for as I was dizzy and almost passing out due to underestimating how many camps would be open on the Esplanade to duck into. Also for trying to keep up with a fella in his early twenties. Story of my life. 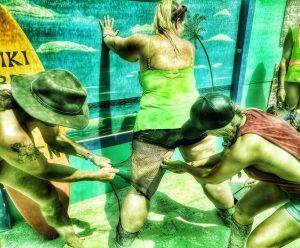 Further wandering around after that to different camps and those experiences that came about along the way, I got my ass spanked with a “love” pattal, walked into a spa with a drunk massage therapist smoking a cig, had all my clothes ripped off at Naked Tiki Bar in order to earn my necklace for the year (naturally) and we helped some poor guy with a ton of ice he was lugging back to camp by himself. Something I was glad to do despite it finishing off a blister already forming on my heel and bringing me back to a woozy enough state to make it a struggle to get back to camp.

After my second burn, I had adamantly sworn to myself that I would get to more workshops. During this, my third, in reality, I only made it to one. At least it was the one I was most set on, an intro to tantra. Happy I at least made there, it ironically ended up being a little too basic, though I was happy to realize that I already had a bit of basic experience and knowledge. It was another pleasantry to find out that the man leading the workshop was about to put on a seminar with a woman I had done some freelance work with to put on an event in the poly and tantra world a few years before. Loving the way community, camaraderie and the degrees of separation always comes with a pleasant magic and a little bit or surprise no matter how many time we experience it.
So many things happened those first three days. My campmate Sweet Cheeks taught me how to work on bikes, I started getting to know everyone (all the while being teased about FJ) and I got the chance to finally use the burner business cards I had made the year before when leaving a couple at Brigit and Aaron’s camp, Go the Fuck to Sleep, so they would know that I had stopped by. Always a must, I found our closest mist camp, Mystopia (as did the rest of my campmates), where I was to constantly zombie out on love sacks over the next few days. 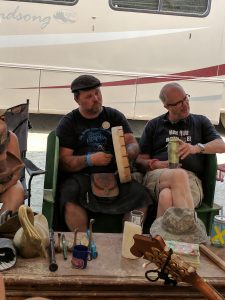 Another daily must was finding the closest foot wash camp where I had an experience of getting my feet washed by a boy volunteering. Amazing to see kids learning how to be full of love and giving back so young 💗. Wader-biking around and constantly getting lost, I found a cowboy style post-apocalyptic day bar where I stopped for a vodka red bull (first time I’ve had one of those is a decade and a half) and a deep random chat with a fella who told me about his life journey. The first real moment for the year with the kind of connective conversation that make it so special. I also ran around at night with my new mate from Australia, Rek Steady (among other playa names), to check out art as an end to those first few days full of the kind of life-reassuring experiences that come from going to the burn.
Bartending at the camp’s annual party was fun as were the really cool group of hot dudes in their twenties and thirties from California who showed up and whose area of our camp was quickly deemed as the Broasis. What I didn’t find fun was all the random wandering we did without getting anywhere. Something understandable for virgins, a demographic I was around/camped with a ton for the year, but frustrating for me as an out of shape and impatient third-year who prefers to hang in neighborhood camps where it’s easier to bond with others. What was great, and yet another favorite for the year, was when my new campmate and pal Venessa and I wandered out onto the playa in the wee hours and happened across the Hug Deli. 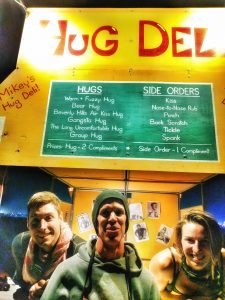 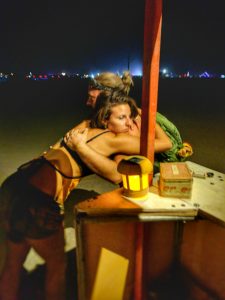 Once there we volunteered to give different kinds of hugs ordered in exchange for payment in the form of compliments. My two favorites being when she was hilarious in giving an “awkward hug” ordered where, in the few times the man started to pull away, she brought it right back in. My other favorite hug was the Cinnamon Roll. The way that one worked was where a line of people held hands and rolled in causing the inside person to be squished in the middle while everyone else wrapped around for different levels of the same. It was near impossible not to laugh the whole time.

Just as with all travel, watching people fall into passionate love, even if only for a few days, is one of the most beautiful experiences I’ve been lucky enough to encounter. While that new (and still now) burner bud Venessa and the playa lover she made for the year, a total sweetie and hot surgeon from across the pond, might feel a bit awkward agreeing, I choose to believe that they did. Even if only having the chance to be together for a week, it was one of the most real and wonderful things I was around for the year.
I even developed a few crushes of my own (I’m a sucker for sweet with a touch of endearingly innocent/nerdy) and had a little fun myself. Overall that wasn’t where I was emotionally, so for the first time, I didn’t have a full-blown romantic playa partner. Kind of a bummer in that deep emotional bonds are what the burn is most about for me but even that provided a new way for me to grow. 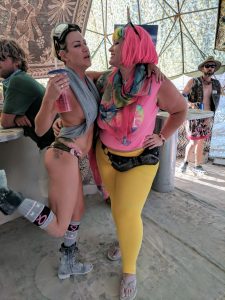 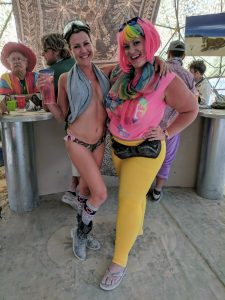 The moment finally came when FJ was to arrive. Earlier that day, when once again turning into a stoned zombie from the crazy heat (and maybe some special chocolate-covered-blueberries), I found my way through blurred eyes to a hammock camp (still too hot) and then to Mistopia before heading back to my camp to wait. Worried that she would get held up at the gate by the little bit of dust and rain we got for the year, it was surprising to hear upon her arrival that she had practically zoomed right in.
Expecting her to take longer to get through, I was in the makeshift shower that had been set up when she arrived. A situation that caused her to be greeted by Martini Man instead of me. Burning Man is clothing optional but it’s rare to see someone completely naked with no body art. Off the norm in that way, Martini Man is a gruff East-Coast personality who has been burning for over twenty years and a nudist who enjoyed peacocking. Something she was to find out when one of her first experiences on the playa was him coming out swinging, if you know what I mean. Further greeting her into camp, he plopped down with bigger balls than either of us had ever seen displayed through spread legs on a couch in the bar without a towel to sit on. Cringe-worthy but also one of the most hilarious moments of the year. Welcome to Burning Man, FJ. 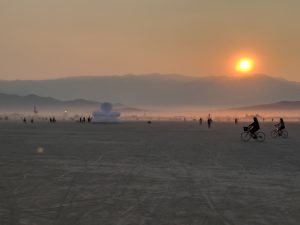