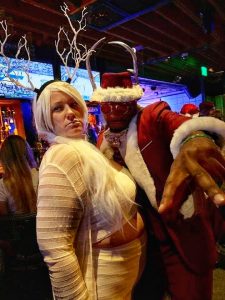 Deciding to stay home in California until after Burning Man 2019 by no means meant that the adventure was about to slow down. December exemplified that as it gave me plenty of opportunity to do what I loved to do best. Celebrate!
Santacon, a pub crawl started in San Francisco in 1994 in which everyone dresses as Santas (with a few relating exceptions) has evolved into a tradition that different cities around the world have continued on. 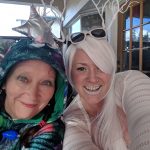 Brigit was heading the charge for Felton and I wanted to stick around for it. My buddy from Spanky’s, Blackbird, even came down from SF to join and we had a blast. Adding additional entertainment, a server from a local restaurant, Creamer House, (where Brigit and I frequented for tuna melts) was one of the twenty or so who joined in and not only managed to leave with a crush on me but also with the big, furry cape my momma had made to keep me warm when I had been working in matchmaking in San Francisco. Long story short, even though I wasn’t all that interested, he still managed to give me a guilt trip about leaving to go home to San Diego and pissed me off by not getting the cape back to me for months. 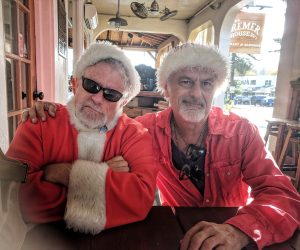 After Santacon but before I headed back to SD, I got my hair did for the first time since Layla died in 2015. Something that may seem as boring and mundane as getting a pedi at first mention but, as had happened with many before, it had taken on some sort of right of passage. Even though I was disappointed with the result, probably my fault for not communicating clearly, I was happy I did it. To me it symbolized making an effort to take care of myself in the ways getting my bohemian lifestyle off the ground had been beating me up. A graduation to the next level of sorts. It’s funny how little random things so often end up being what marks moments of growth and change in our lives. 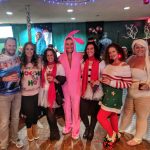 Heading home to San Diego within a couple days thereafter, I staycationed for an event another friend put on called Naughty or Nice. It was a weekend where a social group I had joined years before stayed at a local resort and did all kinds of local activities with the main attraction being a Christmas-themed pub crawl (not a Santacon though) in one of our local beach towns. So, so many pub crawls…
Svetlana had flown out and I met a cool guy from Denver who became my event boyfriend. For any of you burners, travelers or festies out there, you probably know what that’s like. It was great to catch up with old acquaintances and friends. Svet and I had a room right by the event’s main suite, making it even more fun. One of the nights of the event was also Sea World’s annual Christmas pub crawl where trainers, new and old, reunited for some fun. I had been around a lot when Nik was a trainer so it was always fun to join even if it meant that I was jumping between both of the events on one of the nights. It was good times to be sure but I was definitely ready to take a break from partying by the time it was done. For a few days at least. 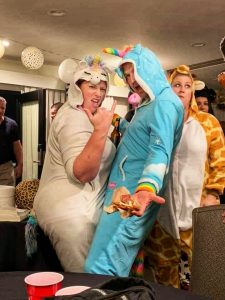 Speaking of Nik, while I was always happy to be back in general, hanging with her and Kate was what what always made it most feel like home. I even managed to dive right back in with their kids when giving myself a black eye throwing Kate’s youngest, Audrey, up in the air in just a way that landed her chin right onto my eye socket. 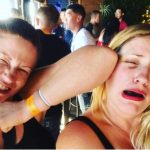 Christmas celebrations still pouring out everywhere I turned with more party plans that hadn’t quite being fulfilled, Wendy and I thought it would be funny to utilize that shiner at champagne brunch in PB for a photo opp before getting drunkenly stuck in neighborhood Christmas parade and block party. The high of the day, something I still proudly chuckle at, being when we successfully crashed a random work Christmas party at The Grass Skirt tiki bar and successfuly pretended to be employees. The low of the day later being when I grabbed a dude’s cock while telling him to do the dishes at Nikki and Brent’s Christmas party. To be fair, Nik had only told me about the party a few days before so I hadn’t had time to rearrange boozy brunch. I stood no chance. Thankfully the dude and his wife were super fun, cool and also rowdy, though it still wasn’t exactly fun apologizing to her a couple days later. God. I still get embarrassed thinking about that one. 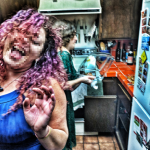 JerseyJ’s Christmas party was the last of the holiday tornado. It was fun with her awesome Italian cooking and big warm and vibrant personality that fit especially great with the holiday but it was also awkward thanks to her roomie being pretty much done with her after all the drama she had put her through with her then recent ex. Also because the rebound she had there at their party was an obvious loser, no doubt added fuel to the fire. It also caused Jersey J’s other friends there to “WTF are you doing” and her to get really upset about it. 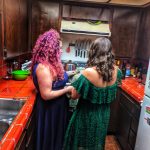 Beyond those who cared about her just being concerned, she never seemed to acknowledge how the people she put in their lives affected them. I was far enough removed at the time to find it interesting to compare behavior patterns and reflect on my own. In the end, even though I didn’t agree with her, I had her back. I didn’t want her to feel alone and she was the only one responsible for making the decisions of her life. Especially when she was spinning in all kinds of different directions from her breakup. I’d end up regretting it but you’ll have to wait to find out about that… 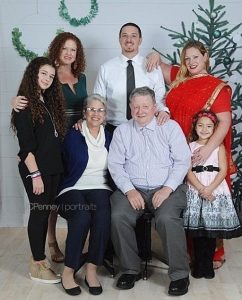 At some point over the month, Wendy set up family pictures at a stupid department store (so 1995) in which I looked horrible. Something that made sense when I got hives an hour later. Probably because I hate those cheesy pictures and thought it was especially lame given that we lived in a beautiful place full of great photographers. Well, just maybe it was also because I had been to about five million boozy Christmas celebrations. Over all, she wanted to make sure we had a recent picture because of how sick our dad was. That was pretty rad. 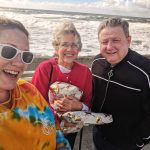 Just like Thanksgiving had been, Christmas day was mostly a bust. Still not comfortable going over to the family’s house, my parents met me for brunch on the OB Pier and that at least ended up being a pretty awesome high given how much they loved it. I then spent the rest of Christmas alone with hives. Again. 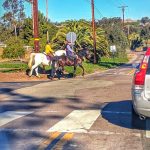 Even if it wasn’t to last as long as I wanted, I loved being home for a minute to catch up with my people and little beach town. Alas, NYE was on our toes and I had plans for it that were about to lead me back North. More specifically, a campout with Mia and Los Angeles burners in the LA mountains. Fun but it was too damn freezing! By the time I had found a warm communal tent on the second night, I wouldn’t leave it. Between that and a couple of dudes I managed to smooch out with, I did manage to find my warm and fuzzy for saying goodbye to 2018 after all. 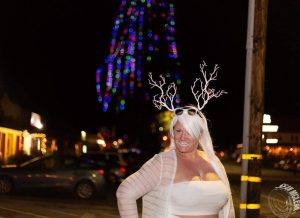 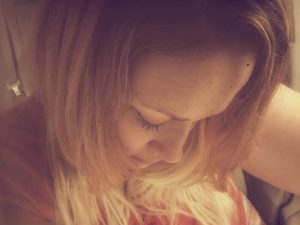 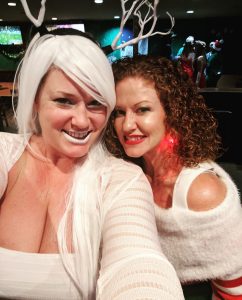 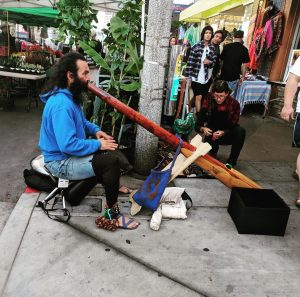